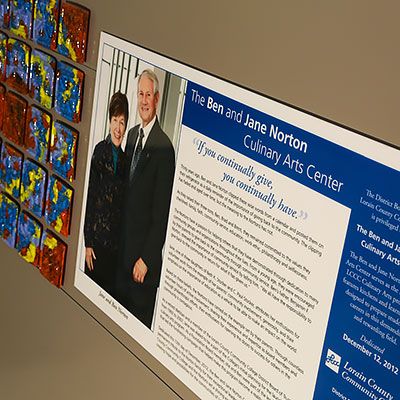 The dedication of the Ben & Jane Norton Culinary Arts Center on December 12, 2012 celebrated the lasting legacy of philanthropy and the ability of philanthropists to inspire hope in the lives of those coming to the Lorain County Community College campus to begin new careers and a new chapter in life.

Nearly a decade prior, the need for individuals trained in hospitality, tourism and the culinary arts field became apparent. At the time, Jane Norton was serving on the College’s District Board of Trustees and was part of initial efforts to develop a culinary arts program. As a retired dietician, she had a special interest in seeing the program launched.

After countless hours spent developing curriculum, seeking out potential partners and recruiting experienced faculty, the only thing that stood in the way of the launch of the new program was the lack of a facility with the necessary equipment and commercial kitchens to support the program. With only limited state and local funding resources, it was evident that such a facility could not be built without philanthropic support.